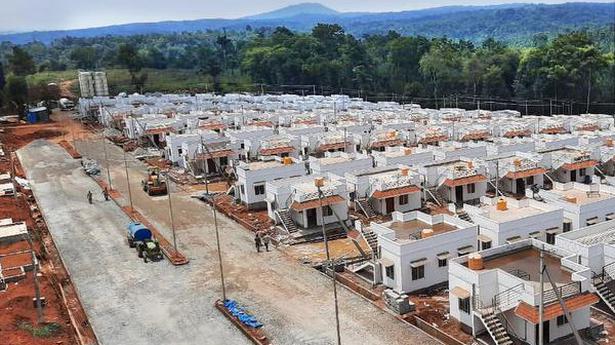 Flood victims in Kodagu will have to wait for houses constructed for them as a part of rehabilitation package since the event organised to hand over the property documents has been put off from May 31 to the first week of June.

It was earlier announced that Chief Minister B.S. Yediyurappa would be handing over the title deeds of 463 houses constructed at Jamboor and Madhenadu before the onset of monsoon on May 31. However, with the extension of lockdown till May 31, a decision was taken at a meeting in Madikeri on Friday to reschedule the event to the first week of next month.

Speaking to reporters in Madikeri, Minister in-charge of Kodagu district V. Somanna, who chaired the meeting, said houses for the flood-affected had been completed at Jamboor and Madhenadu and were ready for allotment to eligible people affected by 2018 floods and landslips. Also, houses under construction at Gaalibeedu and Biligeri would be completed in the next three to four months, he added.

About 383 houses at Jamboor and 80 houses in Madhenadu had been constructed by the Rajiv Gandhi Housing Corporation Ltd. on the sites developed on the government land. Each house built on 30 x 40 sq feet dimension has been constructed at a cost of ₹9.85 lakh.

Barring 35 houses at Karnangeri village, none of the ‘ready-to-occupy’ houses had been allotted by the victims. At Jamboor, Infosys Foundation was constructing 200 houses for the rehabilitation of flood victims. In total, about 800 people had lost their houses in the calamity while the houses of many suffered minor and partial damage who had been compensated based on the extent of damage, claim the officials.

Ranveer Singh Shows Off His Beefed Up Version On Malhaari Remix... TDP to host Mahanadu virtually on May 27-28

Watch | What is PPE?

Amit Sadh Shares His Experience On Completing A Decade In Bollywood