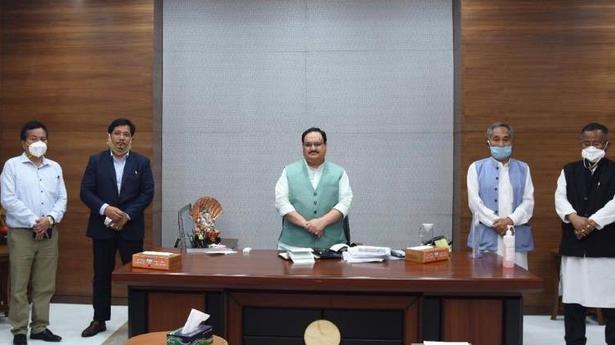 Nine days after withdrawing support, the National People’s Party (NPP) on June 25 confirmed its return to the BJP-led coalition government in Manipur.

Two others among nine MLAs, including three of the BJP who had pulled out of the government on June 17, also left the Opposition Congress and rejoined the saffron party camp.

Meghalaya Chief Minister and NPP national president Conrad Sangma confirmed the return of his party MLAs to the BJP fold soon after landing in Imphal from New Delhi at around 1:30 pm. He was accompanied by Assam Finance Minister Himanta Biswa Sarma who, as the convener of the North East Democratic Alliance, is the BJP’s troubleshooter in the region.

The BJP-helmed alliance is a forum of anti-Congress regional parties.

Both leaders, however, were not clear about the fate of Chief Minister Nongthombam Biren. The NPP legislators, as well as a section of the BJP leadership, have been unhappy with his “autocratic” style of functioning that led to the political crisis.

“We expressed our grievances and concerns faced as a political party in this alliance. We expressed everything in detail and both understood what the problem is. They have assured us that all issues will be addressed and taken care of. As such, we have decided that we will be withdrawing our resignations and the the NPP will continue to support the BJP government,” he said.

He also stated that he would go with the NPP legislators to the Raj Bhavan and submit their letter expressing support to the BJP government again.

“The four NPP lawmakers will continue as Ministers like before but with changes in their portfolios. We decided on continuing our support to the BJP, keeping in mind the interests of Manipur and its people,” Mr. Sangma said.

Two other disgruntled MLAs – Ngamthang Haokip of the BJP and Independent Abdul Nasir – returned to the BJP camp on June 24. The police located them after their wives lodged missing person complaints.

The Congress, which had staked claim to form a government on June 18 after the Biren government was reduced to a minority, decided to “bide our time” and wait for the rebellious MLAs to “make any statement”.

The Congress reportedly went on the back foot when the CBI summoned former Chief Minister Okram Ibobi in a ₹332-crore scam in the Manipur Development Society. His interrogation in Imphal coincided with the parleys the BJP’s central leadership had with the four NPP legislators.

Five in Kannur and two in Kasaragod test positive

Anti-corruption ombudsman Lokpal gets 1,427 complaints in one year

The economy is falling apart but Wall Street had its best...

Europe is building defenses against Chinese takeovers of key industries

Man Used Potato Chip Bag to Skip Work for quite a...

Illegal immigrants, overstaying foreigners to be confined to detention centres even...