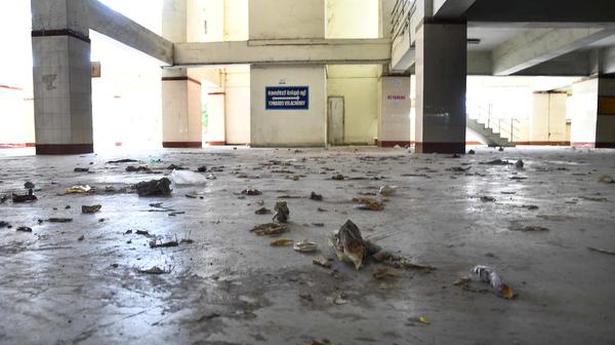 When many commuters feel nostalgic about MRTS train ride, a peek into the stations, which has remained closed since March 24, will show how the lockdown has affected the maintenance of the stations. The platforms are completely covered with bird droppings and garbage is strewn all over the place. The toilets, because of disuse, are in bad condition.

Most of the railway stations on the MRTS section between Velachery and Chennai Beach being huge, the Southern Railway found it difficult to maintain them. So in normal times, a major portion of the space in the ground floor of the stations used to be blocked with only the platforms being maintained by the staff.

However, with the announcement of lockdown three months ago and the railway stations remaining fully shut, cleanliness has taken a back seat.

The Velachery railway station which normally would be kept clean during the regular days is in a pitiable state.

Similarly, the Taramani, Indira Nagar, Thiruvanmiyur, Kasturiba Nagar and Kotturpuram stations are also suffering from bad maintenance with the ground floor in these stations filled with garbage.

A senior official of Southern Railway said the maintenance of railway stations on the MRTS section had been given to private contractors and they were finding it difficult to bring workers due to the lockdown. He said once the lockdown was lifted the stations would be cleaned before the resumption of train services. The Hindu Explains | How will the U.S. visa ban impact...

After Salman Khan, His Makeup Artists Lend A Helping Hand To...

Give details of COVID-19 ‘medicine’, stop advertising it: AYUSH to Patanjali...