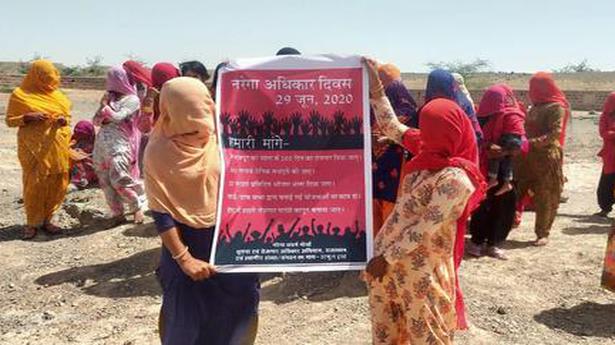 Workers engaged at the sites of the Mahatma Gandhi National Rural Employment Guarantee Scheme (MGNREGS) in Rajasthan have demanded an increase in the days of work from the present 100 to 200 per household and a revision in the daily wages to ₹600. Demonstrations were held at several work sites on Monday and memoranda submitted to the authorities.

The MGNREGS labourers placed their demands through different methods at 214 work sites, 298 village panchayat headquarters and 58 blocks in 24 districts of the State. The Mazdoor Kisan Shakti Sangathan and the Rajasthan Unorganised Labour Union led the protests at several places.

The workers also sought the launch of an urban employment guarantee scheme on the lines of the MGNREGS in view of the continuing crisis of livelihood during the COVID-19 pandemic. With over 50 lakh labourers engaged under the MGNREGS, Rajasthan has occupied first rank in providing jobs to migrant workers returning to their native villages during the lockdown.

While the State government has affirmed that the flagship employment scheme was creating durable assets and had evolved a rights-based framework, civil rights groups said increasing the guaranteed 100 days under the MGNREGS to 200 days would help the poorest of the poor who normally completed the mandated days.

“People in the villages have no work options other than MGNREGS. A large number of labourers will shortly complete 100 days of work, but there will still be eight months left in the current financial year,” Kamal Tak of Suchna Evum Rozgar Adhikar Abhiyan said. Increasing the days of work would especially help the migrant labourers who were going to stay in villages for some time.

The issue of selection of MGNREGS work sites was also raised during the demonstrations, with several workers demanding that only those projects which were approved by the Gram Sabha or wards should be taken up for completion. This would ensure creation of permanent public assets in the rural areas.

Deyu Devi of Ajmer district’s Jawaja panchayat samiti said the government should also pay a tool allowance to labourers. Mangilal Salvi of Udaipur said since the construction activities in the cities were mostly closed, only an urban employment scheme could help the poor labourers earn their livelihood.

Plan to start construction of Ram Temple in Ayodhya suspended in...

Priyanka Chopra is joining Keanu Reeves in ‘Matrix 4’ and the...

Daytime Emmys 2020 list of winners: ‘The Young and the Restless’...