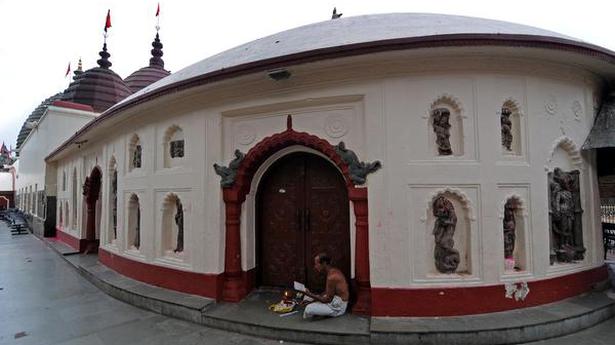 Ambubachi, the festival marking the annual ‘menstruation’ of the presiding Goddess, began at the Kamakhya temple on June 22 without mendicants, hermits and devotees for the first time in almost 500 years.

Many places of worship in Assam had opened after the State government went on ‘unlock’ mode from June 3. But the Kamakhya temple administration decided to keep the premises locked in view of the spike in COVID-19 positive cases in the State, primarily Guwahati.

Till June 21, Assam had recorded 5,586 positive cases, with 2,170 of them active, nine dead and three migrated to other States. The rest have been discharged.

A large number of the positive patients are from Guwahati and its outskirts, making the local administration declare 129 localities as containment zones.

Kamakhya Temple wears a deserted look, during the ongoing COVID-19 lockdown, in Guwahati, on June 13, 2020.

“We decided not to risk community transmission of the novel coronavirus by allowing large-scale gathering during Ambubachi Mela, as in previous years. Our priests are conducting the rituals behind locked gates. Only assigned priests and security personnel are being let in,” head priest Mohit Sarma said.

The rituals began at 7:53 a.m. on Monday and would at end 8:16 a.m. on June 25, after which the door of the sanctum sanctorum would be opened without the commencement of the traditional ‘menstruation’-ending fair, he said.

Legends say the temple atop the Nilachal Hills, whose northern face slopes down to the Brahmaputra river, was built by demon king Narakasura. But records are available only from 1565, when Koch king Naranarayana had the temple rebuilt in 1565.

Kamakhya is one of 51 Shaktipeeths or holy sites for the followers of the Shakti cult, each representing a body part of the Sati, Lord Shiva’s companion. The temple’s sanctum sanctorum houses the yoni.

Temple priests said the ritualistic fair celebrating the Goddess’ period was one of the reasons why taboo associated with ‘menstruation’ was less in Assam compared to other parts of the country.

The attainment of womanhood of girls in Assam is celebrated with a ritual called ‘Tuloni Biya’, meaning small wedding.

Health officials said Ambubachi Mela was also an occasion to promote menstrual hygiene through the use of sanitary pads.

Assam Tourism officials said the State recorded a footfall of 25 lakh devotees during the fair in 2019. A majority of the visitors were from West Bengal, Bihar, Uttar Pradesh and Jharkhand. Many foreigners subscribing to the Tantrik cult of Hinduism too visit.

A similar custom is followed at the Devi temple at Chengannur town in Alappuzha district of Kerala. The temple is shut for the days the Goddess there is believed to undergo her period.

Check dam to be built across Vaigai at Arapalayam to recharge...

Priyanka Chopra is joining Keaunu Reeves in ‘Matrix 4’ and the...

Shah Rukh Khan To Play THIS Part In R Madhavan’s Much...