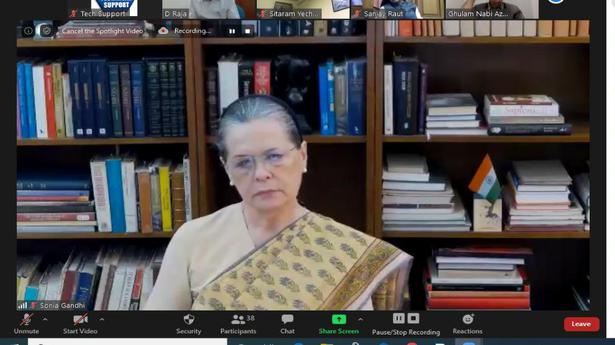 Leaders of 22 Opposition parties on Friday accused the Union government of “unabashedly usurping the power of the State governments” during the COVID-19 pandemic, with Congress president Sonia Gandhi alleging that the spirit of “federalism” had been forgotten as all power is now concentrated in the Prime Minister’s Office (PMO).

The parties put up a charter of 11 demands, including a cash transfer of ₹7,500 a family, free rations, transportation of migrant workers, restoring parliamentary functioning and a revised stimulus package — “a true fiscal stimulus in order to stimulate demand in the economy.”

In a joint statement, the 22 Opposition parties that met for nearly four hours via videoconferencing, asserted that the Centre has failed to discharge its duties in a timely manner, and stated “it is not time for showmanship or one-upmanship.”

“That the present government has no solutions is worrying; but that it has no empathy or compassion for the poor and vulnerable is heartbreaking. The government has also abandoned any pretence of being a democratic government …The spirit of federalism… is all but forgotten,” Ms. Gandhi said.

The meeting began by condoling the loss of lives in West Bengal and Odisha because of Cyclone Amphan, and urged the Centre to declare it a national calamity. All the three Chief Ministers criticised the Centre for delaying the dues. Ms. Banerjee said her State was facing a double whammy with the COVID-19 pandemic and the cyclone. “The economic crisis is getting unbearable to handle and there is no money. It is getting very difficult for us,” she added.

The meeting saw sharp attacks from Mr. Thackeray on the Narendra Modi government. According to sources, he said, the BJP-led Union government had been unresponsive towards non-BJP State governments.

The parties agreed that the economic plan announced by the Centre is tilted towards supply side measures and has little to spur the demand.

Former Congress president Rahul Gandhi compared the sudden announcement of lockdown with demonetisation and called the government strategy unscientific. He said the lockdown was announced when the COVID-19 cases were few, and now we were talking about lifting it when the cases were spiralling.

Rapper Badshah Admits Having A Big Crush On THIS National Award...

Prime Minister Modi to address the nation at 8 p.m.

Top 10 hottest and beautiful women with dimples in the world

‘Work from home’ to be new normal for govt offices post...

Data | The variable impact of the novel coronavirus across different...