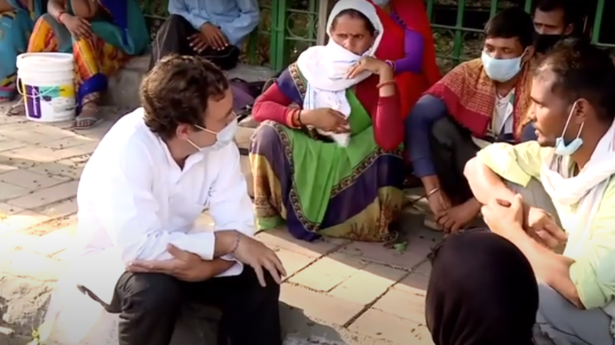 The Congress on Saturday released a documentary film on Rahul Gandhi’s interaction with a group of migrant labourers last week, demanding justice for such workers who are walking hundreds of kilometres to their homes amid the coronavirus lockdown.

At the end of the documentary, Gandhi says the government should immediately give ₹7,500 to the 13 crore needy families through direct cash transfer.

Watch this short film in which I speak with India’s real nation builders, our migrant brothers & sisters. https://t.co/As99mjVvyt

The documentary captures the pain and helplessness the migrant labourers and their families are feeling, as they long to return to their villages after losing their means of livelihood in cities due to the lockdown over the novel coronavirus pandemic.

Gandhi had interacted with a group of migrant labourers near the Sukhdev Vihar flyover in Delhi last Saturday and asked them about their problems as they walked home amid the lockdown. In an over 16-minute documentary capturing this interaction, Gandhi says that coronavirus has hurt a lot of people, but it has hit the migrant labourers the most.

Gandhi, dressed in black pants and a white kurta, is seen sitting on the pavement and giving the migrant workers a patient hearing while assuring them of all help so that they reach their destination safely.

In the meeting with the group of 20 migrants, including women and children, walking from their work site near Ambala to their village in Jhansi, Gandhi is heard asking them about the problems faced by them due to the sudden announcement of the lockdown and the loss of livelihood. The migrant labourers also allege that people threatened to beat them in Haryana if they went out of the house.

The documentary also shows Rahul Gandhi promising help and subsequently they being transported to their village near Jhansi in vans and cars. Upon reaching their homes, the migrant labourers and their families thank Gandhi for his help.

Priyanka Chopra Cuddling Her Doggo Is A Sight Too Cute To...

All You Need To Know about the benefits of Probiotics

See what your blood type say about your personality