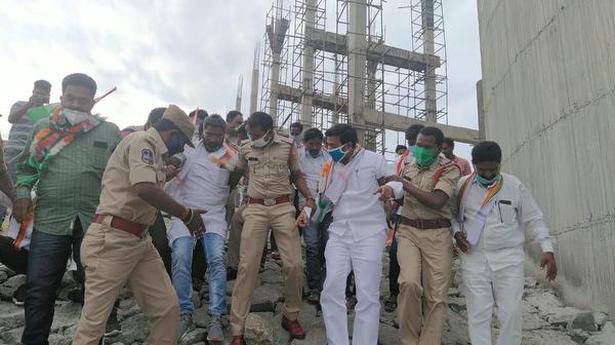 Police on Saturday arrested Congress leaders across the State as they were headed to various projects on the Godavari to highlight the ‘corruption’ and ‘injustice’ being done by the government in keeping the execution of the works pending.

While a few of them were picked up late in the night while on their way to the project sites, others were not allowed to come out of their houses as police placed vehicles and large numbers of personnel at their residences. Interestingly, no police was seen at the residence of TPCC president N. Uttam Kumar Reddy. However, he was unable to move out as all his colleagues were arrested across the State, thus literally stopping his visit.

CLP leader Bhatti Vikramarka was placed under house arrest at Wyra in Khammam while a large posse of policemen was stationed at TPCC working president and Malkajgiri MP A. Revanth Reddy’s residence.

Former PCC chief V. Hanmanth Rao and former MLC Ramulu Naik were arrested at Yellandu guest house and shifted to Kothagudem police station while they were going to the Dummugudem project.

However, AICC secretary A. Sampath Kumar, along with Congress workers, reached Gouravelli and Gabudavelli reservoir, giving the police a slip. Speaking to the media there, he criticised Chief Minister K. Chandrashekar Rao, alleging that the interests of Telangana were being compromised due to his attitude. He demanded that all the projects started by the Congress party be completed immediately. Later, he was arrested and moved to Husnabad police station.

Bhadrachalam MLA Podem Veeraiah was arrested while he was going to Seetharama project and, in protest, he sat on dharna at the Bridge centre in Khammam. Mulug MLA Seethakka was placed under house arrest in Mulugu, preventing her visit to Devadula project. Ms. Sethakka released a video criticising the ‘dictatorial’ rule in Telangana and said her voice cannot be suppressed.

As per the call given by the Congress party on the Godavari Jaladeeksha, TPCC president and Nalgonda MP along with MLA Jagga Reddy and MLC T. Jeevan Reddy were supposed to visit Tummidihatti; a team of CLP leader Bhatti Vikramarka, former Union Minister Balaram Naik, MLA Podem Veeraiah, V. Hanumantha Rao and Ramulu Naik will visit Dummugudem.

Old £1 Coins Will Not Be a Legal Tender Next Week

Pressures increasing on Indonesia and Malaysia in the South China Sea

Anupam Kher Once Broke A Barricade To Hug Michael Jackson &...

Mayawati and Priyanka in war of words